Preparing the Volvo Ocean Race engines for their toughest challenge

With the Volvo Ocean Race now halfway through the arduous and epic voyage, technical support engineer Johannes Karlsson has been giving a full service to the boats’ Volvo Penta engines during a stop-over in Auckland, ahead of the harshest leg across the Southern Ocean.

The teams in the Volvo Ocean Race will face the toughest challenges crossing the Southern Ocean from New Zealand to Brazil.

As one of the world’s toughest sporting events, the Volvo Ocean Race is a nine-month endurance contest that covers 45,000 nautical miles. Not only are the crews put to the ultimate test of man-versus-nature, but the Volvo Ocean 65 yachts also face an extreme challenge. As the next – and most difficult – leg of the race begins, from New Zealand to Brazil, Volvo Penta’s technical support engineer, Johannes Karlsson, has been giving the D2-75 engines a full service to ensure they can withstand any eventuality.

“This is a very tough race, but the D2-75 has proven to be robust and reliable as expected,” says Karlsson. “The engine has done what it is supposed to do, even in extreme conditions.”

Harshest conditions of the race
Leg 7, from Auckland to Itajaí, is regarded as the most difficult and definitive section of the Volvo Ocean Race. As the longest leg, covering 7,600 nautical miles, the teams will face the harshest conditions as they cross the Southern Ocean near to Antarctica: storm-strength winds, huge waves of up to 7m, and icebergs are typical of this leg. In order to assist the teams in remaining safe, the race organizers have set an ‘Ice Exclusion Zone’ into which the teams should not sail, but the crews will certainly encounter bitterly cold temperatures, gales and formidable sea swells. As the most demanding stretch, it is the leg that the teams most want to win. And as such tough conditions can damage or even break the boats, the engine needs to be absolutely reliable in a life-or-death situation.

Robust engine for all eventualities
Each of the seven teams has a Volvo Penta D2-75 engine on their Volvo Ocean 65 vessel. As the heart of the yacht, the engine provides onboard power for a sophisticated network of communications devices, as well as for heating – which is vital in the freezing temperatures of the Southern Ocean – and lighting, the safe-drinking ‘water-maker’, and the canting keel. It is also used for propulsion in an emergency, or to maneuver the yacht in and out of harbors if there is no wind. As such, the D2-75 with Saildrive, needs to be able to work efficiently at all times.

The 2017-18 edition of the Volvo Ocean Race is the second time that these particular D2-75 engines have been used in the round-the-world contest. Having reached the half-way point of the current race, each engine has so far been used for around 60,000 nautical miles, and will need to endure approximately 22,500 more miles. On this edition, each team has so far used their engine for around 500 hours – up to four or five hours per day – using around five liters of fuel, to repeatedly charge the batteries to deliver all the power that the vessels’ equipment require. 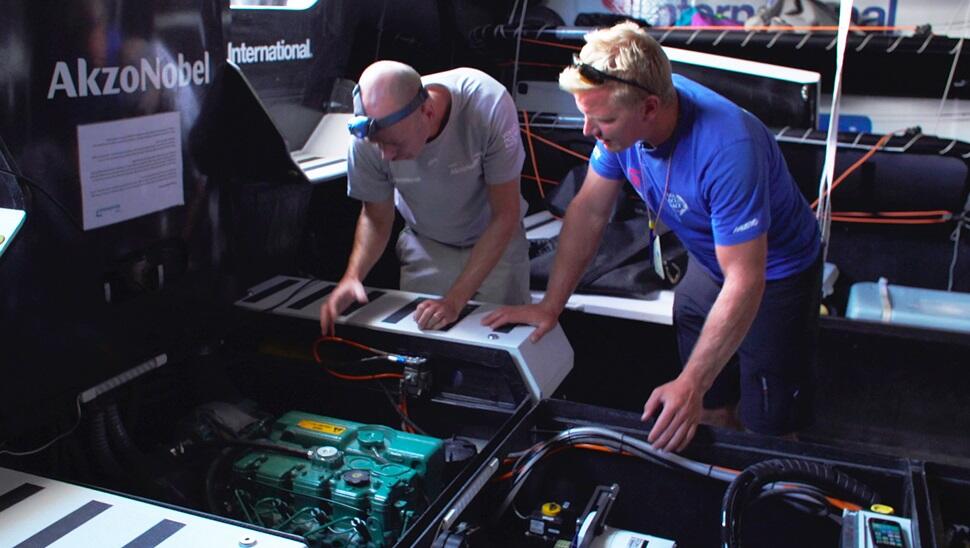 Full service to keep the fleet moving
Karlsson has already conducted interim servicing of the engines during previous race leg stop-overs, but the longer scheduled break in New Zealand has enabled him to give the engines a full service. This has included changing all the consumable parts, such as air and oil filters, and making any adjustments due to wear and tear on the engines.

“We’ve not had any big issues, but the propellers are put under a lot of pressure from the constant high speeds and higher G-forces than in normal sailing conditions,” says Karlsson. “One team had an impact from something like a large piece of wood in the water, which put the saildrive slightly out of position and cracked the flywheel housing; and another team’s engine need a clutch change, load idling adjustments and alterations to the gearbox coupling, but all the engines have been running well.”

Karlsson has had to schedule his service of each engine to fit in with technicians who work on other sections of the vessels, including the electrics, rigging and sails; and all work had to stop for 24 hours while each yacht was re-covered with anti-skid paint. Servicing of each engine normally takes around two or three hours.

“Servicing is a logistical challenge, but with the increased digital connectivity for this race between the boats and the Race HQ, it makes it easier for me to see how each engine is performing, and to monitor things like fuel consumption,” says Karlsson. “The teams can also send any queries they have while they’re onboard, so that’s a real advantage to help prepare for a service.”

Good teamwork
As Volvo Penta’s engine technician for the Volvo Ocean Race, Karlsson has been part of The Boatyard, a shared facility where all Volvo Ocean 65 parts’ suppliers work to carry out maintenance and repairs. And in addition to servicing the D2-75 engines, he has also serviced Volvo Penta’s V6-280 DPS aquamatic sterndrive gasoline engines for each team’s rigid inflatable boats (RIBs; used for in-port hospitality and transfer of crew and equipment).

“We have planned the service access points better on this race, in terms of the design of the RIBs, so it’s been easier than before,” says Karlsson. He adds: “Overall, this is the first time I have been part of The Boatyard concept. Before I was just on my own with my work, so it’s been good to have colleagues to work with. It’s been a real pleasure.”