Richard Sears – President of Mingan Island Cetacean Study (MICS) has been studying Blue Whales off of Canada’s St Lawrence coast for more than 40 years. But how do you go about collecting data on these shy giants?

Every summer for over four decades, Richard Sears and his team at the Mingan Island Cetacean Study (MICS) have been out at sea, recording and taking samples of Blue Whales. These animals are notoriously hard to spot. So, a good day for whale research means one thing: calm waters.

Calm waters and no waves are the ideal weather conditions to be able to collect data for this important whale research. Part of the team’s work consists of understanding important aspects of the whales’ lives, including patterns of residency, population size and the health and condition of the whales. Richard says: “The glamorous part of the work is to get out on the boat and see the animals. They are amazing to watch”.

He continues: “We check the weather the night before. Our everyday work consists of getting up in the morning and getting our gear ready and then getting out on the water. As soon as we have pretty good light, we hope to find them. Since these animals are so mobile, you have to be mobile as well.”

The boat, the team use to conduct this research, is a Targa 32 powered by twin D4-260 Volvo Penta engines. Which provides the power and agility to get near enough to these animals to conduct their research effectively and safely.

Once the team has collected tissue samples and photographs its back to dry land to analyze their finds and record them in the extensive database.

No easy feat
Studying mobile marine life – even something as large as a blue whale – is not easy. The ocean is quite literally immense. It covers 70% of the Earth’s surface. You have probably seen this figure before but have you really thought about it? Picture the vast Saharan desert, the seemingly endless stretches of Himalayan mountains, the uninhabited Australian bush – all this land and more is just 30% of the earth. Now imagine searching for creatures in an area more than twice that size. It’s no simple task.

The blue whale, Balaenoptera musculus, is thought to be the largest animal (25m long) to ever inhabit the earth – larger even than any dinosaur we know of. Its tongue alone weighs more than a full-grown elephant – yet as animals go, we know very little about them. This is, in part, because they migrate huge distances and spend the majority of their time below the surface of the ocean. 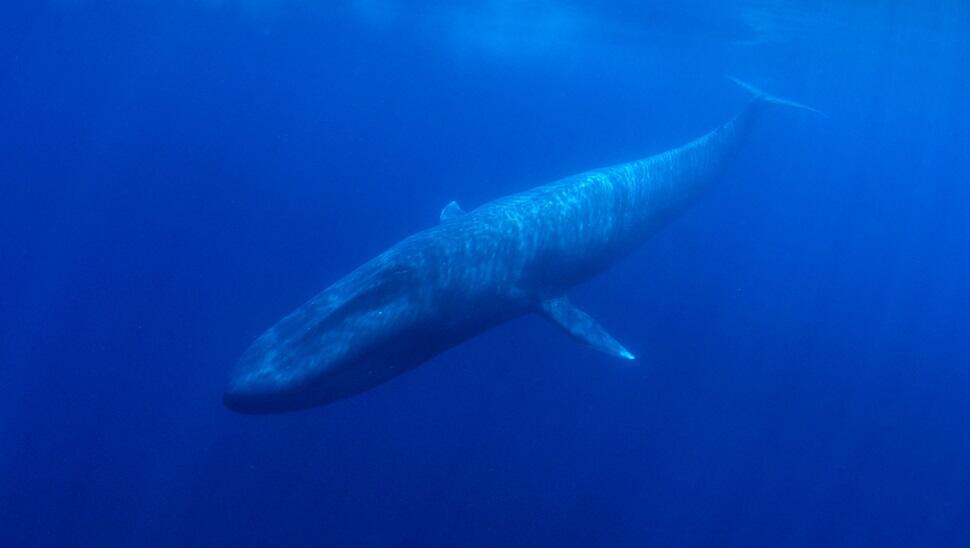 An important task
Globally, the blue whale population is estimated to be 10,000 – 25,000, roughly 3-11% of the population size estimated in 1911. Commercial whaling played a huge roll in the speedy decline of the global blue whale population in the 19th and 20th century. The International Whaling Commissionbanned the taking of blue whales in 1967. Today, blue whales are protected under both the Endangered Species Act (ESA) and the Marine Mammal Protection Act - and have been protected under the ESA since 1970. This means that the blue whale is in danger of extinction throughout its global range. The biggest threat to them today is vessel strikes and entanglements in fishing gear.

The total number of blue whales in the Northwest Atlantic population, where Richard and his team operate, is unknown, but it is estimated that it does not exceed 250 adults. There is a recovery Strategy that has been put in place in Canada with the long-term goal to reach 1,000 mature blue whales – Richard and his team at Mingan Island Cetacean Study (MICS) contribute valuable data to this process.

“There is a lot of work to be done,” says Richard. “Even though our contribution is probably pretty slim we are adding to the overall knowledge of this species. Hopefully, they’ll be other generations of biologists who will continue it.”