Construction work ahead!
We are getting future ready and the beta version of the Industrial site is now live. Complete launch Q2 2022.
Experience the future of volvopenta.com
Press release

A Volvo Penta quad IPS installation with IMO III compliant after-treatment package has been fitted to a tourist ferry serving the Amalfi coastline. Offering not only excellent maneuverability, fuel economy and emissions benefits, the compact packaging liberates more seating space on board.

Thousands of tourists flock each year to enjoy the splendours of the Amalfi coastline, the 50km strip of picturesque coastline on the southern edge of Italy’s Sorrentine Peninsula. Now visitors are able to enjoy a new attraction – a 36m ferry that can transport up to 540 passengers each sailing on visits to the towns of Salerno, Maiori, Positano, Amalfi and the islands south of Naples.

The ferry, called Vega, is also unique, as it is the first vessel in the region to combine the benefits of Volvo Penta IPS with the company’s latest SCR aftertreatment system that complies with the new IMO III emissions regulations. The ferry is designed to work for between 3-3,500 hours a year during a normal tourist season, which stretches from Easter to the end of October. It entered service in mid-August this year and by October 18th had clocked up 360 successful and trouble-free hours of operation.

Ferry builder and operator
The ferry belongs to marine transport company Travelmar and operates for 10 hours a day from Monday to Sunday, covering approximately 110 nautical miles each day. The ferry has been built in Travelmar’s own boatyard. “This allowed us to find the ideal combination of benefits to suit both the construction and operation of the ferry,” says Andrea Piccione, Volvo Penta’s Italian marine manager. “Our Volvo Penta IPS package for IMO Tier III emissions is very compact – the most tightly packaged in the market. So much engine room space is liberated compared to a normal inboard shaft drive installation that there was space for up to 20 extra seats.”

As an inboard integrated propulsion system, IPS offers greater performance, fuel efficiency, maneuverability and comfort than a traditional inboard engine. The design features forward-facing twin counter-rotating propellers that are mounted beneath the hull. As the propellers operate in undisturbed water, they experience less drag. This improves performance and reduces fuel consumption – by up to 30% compared to a traditional inboard shaft-drive engine arrangement, reducing operating costs significantly. For such a sizeable boat, the Vega consumes only 120-130 liters of fuel an hour. The individually steerable IPSs are controlled via a joystick and enhance maneuverability, offering precision handling and secure berthing, even in difficult weather conditions – an asset given the regular docking that this ferry will experience. 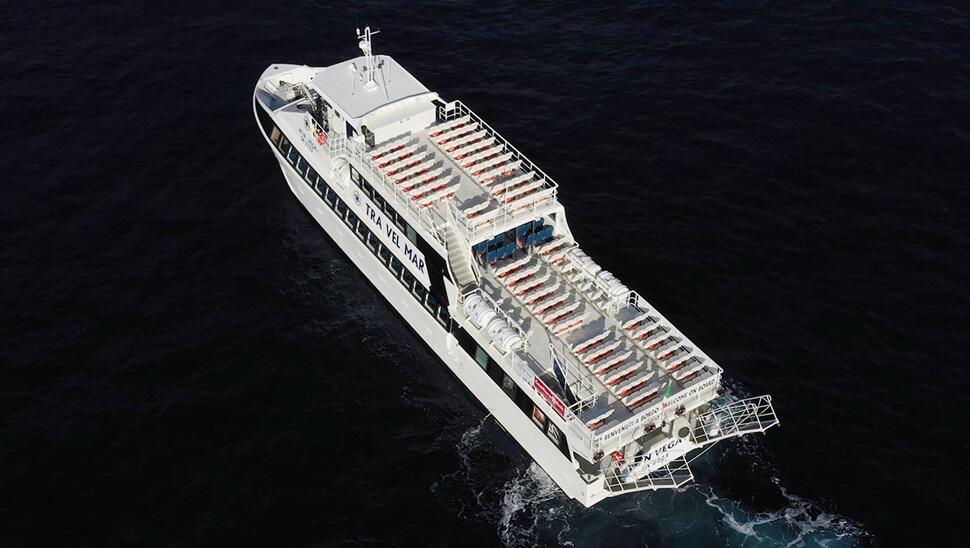 Twice the power, but three times as many passengers
Travelmar already has a good experience of the IPS system, as in 2016 it built a 21m ferry, the Antares, which uses a twin IPS installation and has a capacity of 180 passengers. Such has been the success of this craft that the company was sufficiently confident to adopt IPS on the much larger Vega, which uses a quad IPS 900 installation. The IPS 900 has a crankshaft power of 700 hp and has been calibrated to allow for a maximum speed of 20 knots at full load


“The advantages of using Volvo Penta IPS are obvious,” said Salvatore Gambardella, owner and manufacturer of the Vega. “This ferry has lower fuel consumption than ferries with the same power output from two traditional shaft engines. It also has twice the power of the Antares – but carries three times as many passengers, boosting per-passenger efficiency.

“With Antares we already witnessed improved maneuverability compared to traditional shaft propulsion systems, and this is now confirmed with this much bigger ferry. And, thanks to the joystick’s ease of use, docking and undocking is now conducted approximately two minutes faster, saving just under an hour each day – and easing the captain’s stress levels at the same time.”

Ambassador for sustainable transportation
One of the main drivers for the selection of the IPS and IMO III combination was Travelmar’s desire to be a good ambassador for the ocean environment. So, while the IPS 900 system is impressively powerful, it was its efficiency that was most compelling. The system is extremely efficient, saving 25-30% on fuel consumption compared to a typical inboard shaft drive installation – with a similarly large reduction in CO2 output. Partnering IPS with Volvo Penta’s IMO III engine solution also radically cuts NOx emissions – by up to 75% – while maintaining engine efficiency and drivability.

The heart of the IMO III system from Volvo Penta is its Selective Catalytic Reduction (SCR) aftertreatment system, with each of the four IPSs’ engines having its own muffler. The engines are also approved for use with hydrotreated vegetable oil (HVO), a biofuel that reduces carbon dioxide and particulate matter by up to 90%. With new legislation coming into force in January 2021 that will require vessels above 24m to be fitted with heightened emissions control systems, many boat builders are concerned about the space requirements involved on board. No such concerns with the Volvo Penta IPS/IMO III combination. As the total package has been designed to work together, it is light as well as compact, with minimal impact on fuel consumption.

Roll on 2021
Vega is currently out of the water, but it will be ready to welcome and ferry happy holidaymakers from Easter next year onwards.