Saving €100,000 a year by changing to Volvo Penta engines

Volvo Penta engines have been helping to power Dalby Maskin, a quarry and recycling site in Sweden, for more than a decade. The company has saved up to 20 liters of fuel an hour per crusher by switching to Volvo Penta engines and has also seen the time between service intervals increase from 250 hours to 1,000 hours.

Volvo Penta has been field-testing engines in partnership with quarry and recycling company Dalby Maskin, at their site in Uppsala, Sweden, since 2010. What started as a two-year field-testing project for a Stage 3B engine in a rock crusher, soon expanded into a request from the customer to repower their other crushers, as well as Stage IV and Stage V testing in crushers and a screener. Dalby Maskin says that by switching its four crushers and a screener to Volvo Penta engines, it’s saving over €100,000 a year in fuel costs.

“After seeing how reliable and fuel-efficient the engine was during the field test, we knew it made financial sense to repower our other crushers and make the switch from a Volvo Penta competitor’s engine to a Volvo Penta model,” explains Jesper Sundström, Quarry Operations Manager at his family’s business, Dalby Maskin. “Volvo Penta had some great ideas about how to reduce fuel consumption, noise, and rpm (revolutions per minute) with a smaller engine while still getting the performance we needed – and they were right. We went from this competitor’s 15-liter engine to a Volvo Penta 13-liter engine. Since making the change, we’ve cut fuel consumption by up to 20 liters per hour (l/h). Previously, the service interval was 250 hours but now we have a 1000-hour interval between oil changes. And thanks to lower engine revs and smaller engine displacement, we don’t have to change the air filter that often. Within a couple of years, the engines pay for themselves – so there is a good business case.”

Maximizing fuel efficiency
There are two parts to Dalby Maskin’s business, quarry operations, and recycling. The family-run company – which has been in operation since 1989 and employs approximately 30 people – manufactures and sells rock, concrete, and asphalt crushing products, as well as wood and recycled materials. Volvo Penta is conducting field tests at the quarry, but there are Volvo Penta engines powering machines, such as woodchippers, on the recycling side of the business too. In total, the company owns around 25 machines. 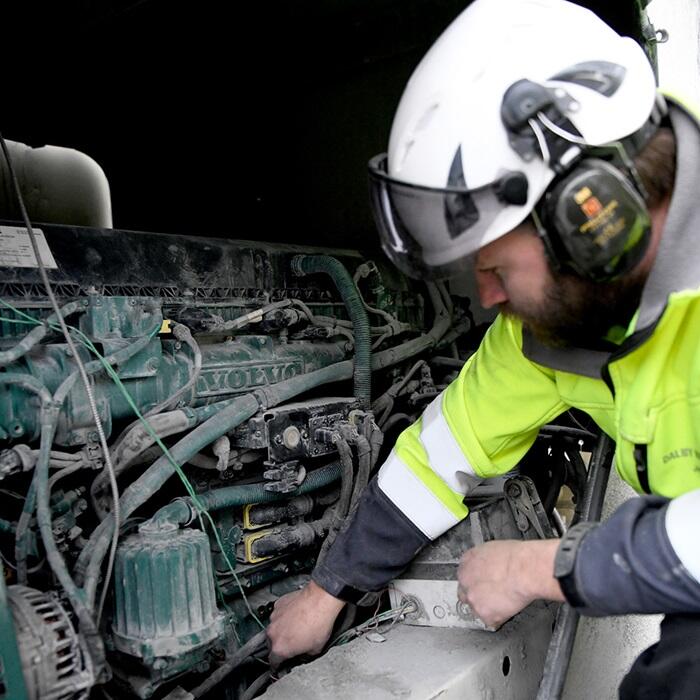 Volvo Penta has tested seven engines with Dalby Maskin over the last ten years. During this time, the company has also bought Volvo Penta engines to repower other equipment at the site. Currently, Volvo Penta is field-testing two engines at the quarry: a D13 Stage V, which is powering a Metso crusher, and a D5 Stage V, which is powering a screener. Testing started on the D13 in 2017 and so far, it has clocked up around 7,000 hours. The screener was originally repowered in 2015, switching from a competitor’s engine to a Volvo Penta D8 Stage III. In 2017, this was changed to a D8 Stage V, and last year it was replaced with a D5 Stage V – which has already clocked up around 2,000 hours.

“We changed the size of the engine to see the difference between the D5 versus D8, as we thought the machine was over-powered for its application and workload,” explains Andreas Nyman, Manager Field Test, and Data Management at Volvo Penta. “We also changed the hydraulic pumps so we could reduce the rpm from 1900 to 990. With these changes, we managed to decrease the fuel consumption from 11.6 l/h to 7.5 l/h. This is a significant reduction which saves the customer a lot of money, is better for the environment and doesn’t compromise performance. This is why we work with customers to find the right size engine for their application and usage, to maximize fuel efficiency and uptime.”

Durable and reliable
Testing is a key part of the development process at Volvo Penta to verify performance, reliability, and durability. In-house testing in test cells involves everything from specific component tests to calibration, functional, and stress tests. This allows for all the parameters to be fine-tuned to ensure the engines deliver the right power, torque, and emission requirements. The engines are also tested in field tests where they are installed in machines that customers use for real work. Volvo Penta currently has 35 Stage V engines operating in different applications, climates, environments, and countries as part of ongoing field tests.

“We work with customers to test our engines in the most demanding environments to ensure optimum performance whatever the application, including high altitude, underground and hot and cold climates,” says Andreas. “Testing our engines at Dalby Maskin is ideal due to the dusty and freezing winter conditions. The work is tough and demanding – with lots of vibrations – and the engines are running five days a week for up to 12 hours a day. We have telematics systems mounted on the engines, so we are collecting a lot of data. We can see that the engines are performing really well, and the customer is happy so it’s a success for everyone involved.”

“Our experience with Volvo Penta is excellent,” concludes Jesper. “We’re saving time and money – that’s why we’ve bought new Volvo Penta engines and repowered other equipment at our site. We haven’t had any problems with the engines and feedback from our team is very positive. The noise levels around the machines are much lower, which makes a huge difference on site. The new engines are also much cleaner and the increased time between service intervals is another big benefit. Since our introduction to the brand ten years ago, we haven’t looked back. Now we want all the new machines we buy to be fitted with Volvo Penta engines.”