Emobility will play a key role in Volvo Penta’s mission to become a world leader in sustainable power solutions. The company aims to transform the off-road industry together with its customers. To better understand customers’ needs and the current challenges around emobility Volvo Penta engineers have been viewing things from an operator’s and OEM’s standpoint.

The move to electric power solutions can’t happen at the flick of a switch. There is a lot to understand and overcome when it comes to this technology and how it will be implemented by Original Equipment Manufacturers (OEMs). To gain a deeper understanding of the challenging journey that OEMs must embark upon, Volvo Penta acquired a terminal tractor – an extremely viable product line for electrification – and proceeded to begin with the conversion to an electric driveline in 2015.

Peter Brankell – an Application engineer and one of the key players in the formation of Volvo Penta’s Industrial Electromobility business – brings a great deal of knowledge and expertise to this project. He explains: “From the beginning, we knew material handling would be one of the main markets for electrification, with its known drive cycles, high machine utilization, and the fixed environment of a harbor with a good power infrastructure. In a wider context, it would help us gain better insight into the challenges and opportunities in the installation process, which is paramount when designing driveline solutions for OEMs.”

Most manufacturers are skilled at implementing an internal combustion engine into their driveline but developing a wholly electric driveline is a completely different scenario. It not only requires the integration of a whole array of different components, but complex software calibration and new forms of intensive testing methods to optimize system behavior for precise performance across a range of different vehicles. Plus, a skilled partner that has gained a vast amount of knowledge in how to get the best out of it… 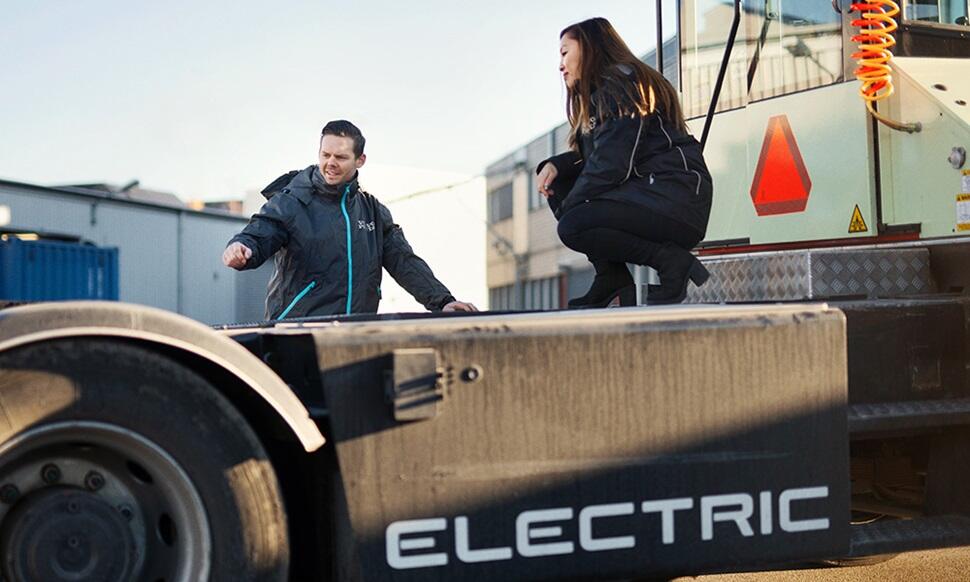 Two other key players at Volvo Penta are Development Engineer Kerstin Kha, who has focussed exclusively on electromobility projects since she joined the company from its graduate program 18 months ago, and Felix Engström, Project Manager Verification, a former marine test driver turned electromobility test engineer, in charge of verification and software calibration activities, customer field tests and test object installations.

Their passion is contributing to Volvo Penta’s transformation journey to becoming a net-zero emissions company by 2050. “I quickly realized electromobility was the area that appealed to me as these innovations make a true difference,” reveals Kha. “I’m excited about how machines in the industry will adapt to the technology transformation. How can electrification be implemented into industrial applications, and how much of an effect will it have on requirements such as design, reliability, uptime, and noise levels?”

“Apart from the development of hybrid and electric technology, I think there is a lot more to come from the development of batteries and fuel cells,” adds Engström. “I believe that pretty much all new wheeled vehicles will be fully electric by 2030, which will have driven major changes in those technologies. It’s not a question of ‘why should our partners care about this?’ – they have to care about it. The transformation is inevitable – it began years ago, even with relatively primitive technology.”

Hours upon hours of field testing
Carrying out real-life testing in Sweden’s Port of Gothenburg, the tractor was initially run with its existing diesel driveline, with its performance monitored to provide a baseline for future developments. For internal testing purposes, the tractor was then rebuilt in the same diesel-electric parallel hybrid configuration used in Volvo’s hybrid buses. Simulations of different drive cycles were performed on this diesel-electric parallel hybrid version of this tractor. This testing eventually confirming a 30% increase in efficiency over a typical operation cycle. It was clear the team had created a successful proof of concept that was ready for market feedback and could be applied to off-road applications.

The tractor was then converted to fully electric using proven electromobility technology from Volvo Group, namely the batteries and a pair of electric motors connected to the gearbox. However, the applications Volvo Penta is working with have more space restrictions in general compared to Volvo trucks and bus vehicles. Therefore, Volvo Penta adapted the packaging solution of the driveline to the terminal tractor design.

Extensive testing then ensued, with the fully-electric tractor configuration accumulating 440 hours over four months at the port as everything from durability to driveability was gradually enhanced, before another 300 hours of testing with simulation models followed on a functional test platform at Volvo Penta’s facilities in Gothenburg. 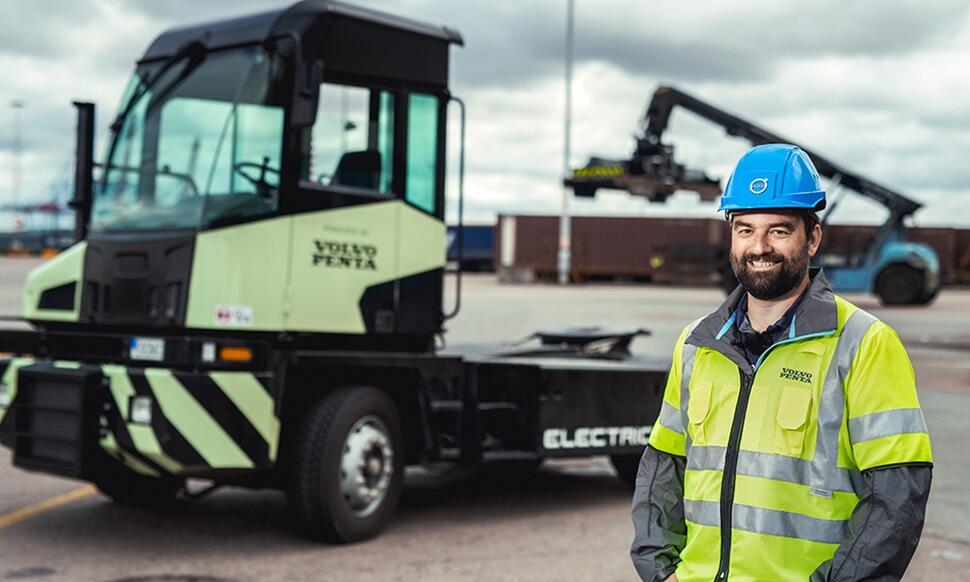 “At the beginning, it was more a case of functional implementation than fine-tuning,” clarifies Engström. “We wanted to secure software maturity and learn about system behavior. When we found problems, we could trace where they occurred using the software and see what we needed to do to make the system work as we wanted. This gave us so much valuable knowledge about how to adapt the system to an OEM’s specific needs in future.”

“The customer will see better uptime and reduced maintenance thanks to the increased reliability that our intensive testing has produced,” Brankell states. “Not to mention total cost of ownership will typically be reduced in most parts of the world, with performance and ease of operation being at least equal. Ports all around the world are facing the challenge of becoming emission-free over the next decade or so, but they can be assured that they won’t have to settle for a substandard replacement solution.”

The Rosenbauer electric fire truck
The tractor with the electric driveline was first exhibited at TOC 2019, and the following year further proof of the driveline’s great potential came with the announcement that Austrian OEM Rosenbauer would be using it in its forthcoming municipal fire truck, RT Revolutionary Technology. This electric fire truck was purpose-built to take advantage of the new technology, enabling major enhancements in terms of lowering its center of gravity and improving access for firefighters carrying heavy equipment.

“The terminal tractor played a vital role in testing and verifying the Rosenbauer electric fire truck,” says Kha. “Even though the tractor has a much lower gross vehicle weight, for example, we could accurately simulate anti-slip tests and other driving behaviors of a fire-truck by making sure the correct loads were placed on the motors and inverters and optimized the speed limits of the motor to prevent current peaks. We learned how to utilize the terminal tractor as a test object for a fire truck.”

“At the beginning of the project, this approach works very well, but closer to production, not so much,” states Brankell. “At that stage, we adapted one of our FMX 4x4 trucks with the same driveline layout, which is as close as we can get for testing functional safety in different environments. This also helped our engineers to decide on final changes to wiring and smaller components.”

The future is electric
Once Rosenbauer’s electric fire truck goes into production this year, the terminal tractor will continue to play a key role as a test platform for Volvo Penta engineers to adapt their electromobility portfolio to future vehicle partnerships. The combination of components can remain generally unchanged, just leaving the inevitable software and wiring changes to meet new demands.

“Although fully electric terminal tractors are already on the market, they are a first-generation product,” says Brankell. “But most OEMs would prefer to work with an experienced driveline supplier offering the entire 600V system along with superior safety, reliability, and exceptional aftermarket support. Aside from the active cooling unit for cooling the batteries and the cabin, the majority of components are existing Volvo Group components – so by the time an OEM is ready to begin production, we’ll have several thousand vehicles on the road.

Our approach going forward in the development will center around close collaboration with OEMs and operators such as material handling and special vehicle applications. We already have partnerships with OEMs like TICO in the USA. This customer-centric approach is critical for success,” he concludes. “Several ports are already requiring material handling equipment to be emission-free by 2030, which effectively means every new machine purchase from next year onward should be emissions-free – fully-electric, HVO, etc – if they are to change their whole fleet in time. With all the know-how we have gained, and continue to gain, from testing our terminal tractor – we are eager to guide and help our customers.”