Wakesurfing is one of the most popular sports in today’s boating scene. So how does Forward Drive compare with V-Drives for wakesurfing and towsports?

V-Drive boats, with their towsports-specific hulls and tucked-away props, have long been a favorite of the wakesurfing crowd. Why? They produce large, clean wakes ideal for the sport. Towsport manufacturers also have the advantage of having been an integral part of the wakeboarding craze and are familiar with concepts like added ballast, speed control and wake-enhancing tabs that build wakes to their max potential. Perhaps not so obvious, but even more important — V-drives, with their propellers tucked far underneath the hull, are safe for a surfer plying the wake in close proximity to the transom. More popular, more mainstream sterndrives and outboards, with their propellers exposed behind the transom, presented a safety hazard that effectively kept them out of the running.

Volvo Penta, of course, changed all that with the invention of the Forward Drive. By taking the wildly popular sterndrive and relocating its props to the front of the drive rather than the rear, Forward Drive solved the issue of propeller exposure. In the process, Forward Drive opened up the sport to a large number of mainstream boat builders, enabling them to give their audience a viable wakesurf alternative that, in many ways, was often a better choice for the average recreational boater. 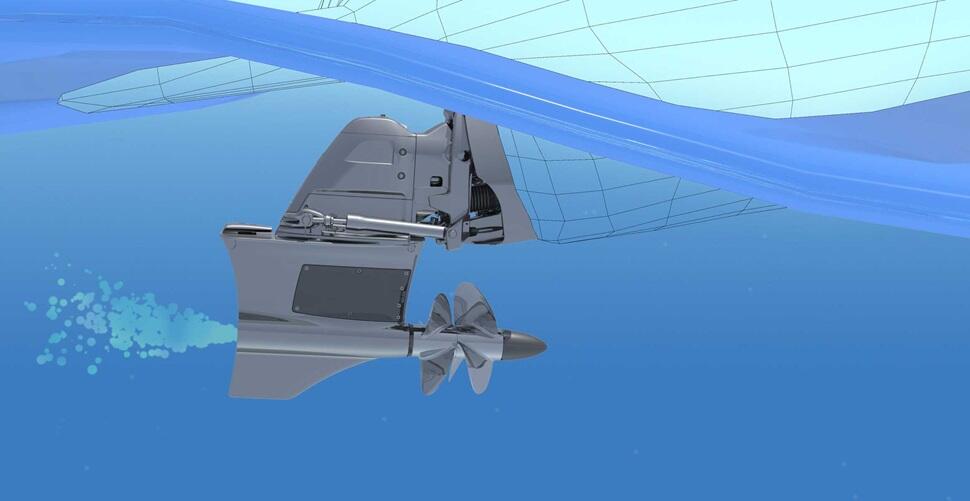 But how do the two propulsion systems actually compare, not just in terms of wake production but also all those hours you, your friends and family spend on the water?

The most obvious difference has already been touched upon. A V-drive places the propeller at the end of a fixed driveshaft that exits well under the hull, its sole purpose to propel the boat forward or backward through the water. Steering is accomplished via a movable rudder, located directly behind the prop. With Forward Drive, Volvo Penta takes the existing sterndrive concept, where propeller and rudder pivot in unison, but relocates its dual, counter-rotating props from the rear of the drive to the front.

Each choice significantly affects the boat it’s on. While both approaches provide good results at speed when moving forward, a sterndrive’s “vectored” thrust proves superior during low-speed handling, particularly in reverse. Turn the wheel and the boat will respond without hesitation in each direction. V-drives don’t display the same predictability in reverse because prop-driven water never passes over the rudder. This means drivers must learn to use the prop’s torque and the direction of prop rotation for proper control in reverse. One direction will be favored and produce the expected results, but movement in the opposite direction is almost non-existent. V-drive operators often overcome this by resetting the angle of the boat with repeated bumps of forward thrust when backing extended distances and learning which side to dock on to take advantage of torque and rotation, but it’s not the intuitive, immediate response provided by a sterndrive. Some V-drive boat manufacturers have begun to add optional steering fins or thrusters to solve the issue, but it’s often a relatively expensive upgrade. 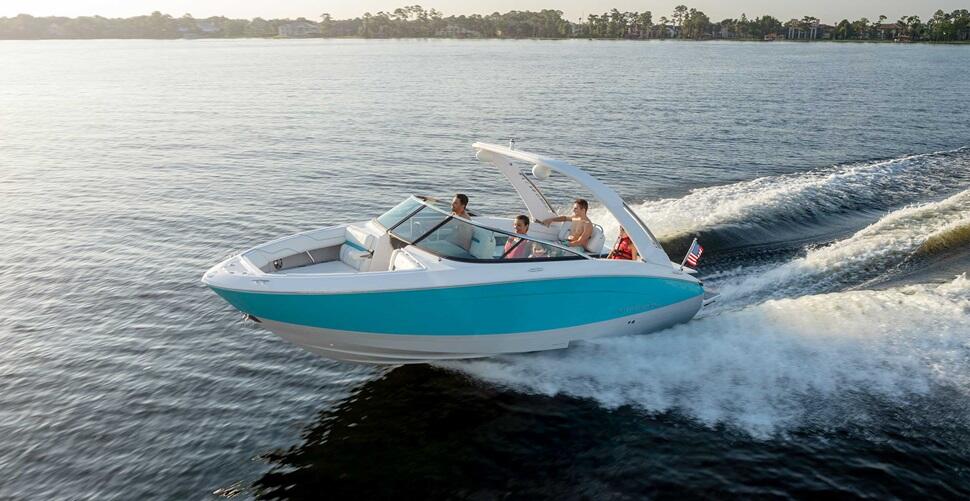 Theoretically, trim should also allow any sterndrive boat to get into shallower waters than a V-drive, but in fairness the location of the props at the front of the Forward Drive negate much of this advantage. Both types of propulsion require users be more careful in shallow conditions, as well as when trailering, to compensate for the added exposure. Forward Drive, however, does have the advantage in the event of a prop strike. Unlike a fixed driveshaft, prop and rudder, Forward Drive features breakaway couplings between the vertical shafts and, similar to most all sterndrives, a “kick-up” release to lessen damage should you hit the bottom or underwater object.

As exhaust exits below the waterline, Forward Drive also proves quieter during operation. And no smelly exhaust fumes for the surfer and passengers.

Other considerations? Similarly powered, a V-drive typically both gets onto plane and reaches the 30 mph threshold faster than a sterndrive thanks to its downward prop-shaft angle and typically shallower hull deadrise. The Volvo Penta Forward Drive, however, is typically superior in terms of top speed thanks to the ability to trim the drive and raise the bow, reducing the hull’s wetted surface. Both typically consume fuel in comparable amounts at surf speeds; Forward Drive typically holds the advantage at cruising speeds and full throttle. As to that wake, yes, V-drive may remain the gold standard when it comes to wakesurfing. The advent of Forward Drive, however, along with continual advancements in wake tab or gate designs have allowed Forward Drive boat manufacturers to significantly close the gap…and in the process, offer arguably the more versatile, all-around boat for families who want to use their boats for more than just wakesurfing