Recognizing that only a rugged and reliable, environmentally friendly engine would do, Newt Marine Service of Dubuque, Iowa, selects Volvo Penta engines for its fleet repower.

It’s safe to say that Newt Marine Service cares about the environment. A good portion of the 55-year-old marine construction company’s business involves restoring habitats for birds and upland animals and dredging fish habitats along the Missouri and Mississippi rivers.

Newt Marine places rocks for the Army Corps of Engineers to restore native river habitat and stabilize riverbanks. Every day, crews jump on a flatboat at dawn to get to barges, up or down stream, then start placing rocks. “We usually do 2,000 tons of rock placement in a day,” says Newt Marine President Carter Newt. “We start by unloading one barge, then swap it out in the fleet, get another barge, and continue placement. We work long hours and do whatever it takes to get the job done.”

The hours are long, and the work is dangerous. The Mississippi—the second largest drainage system of the United States—has a fierce and swift current, made more treacherous by changing weather patterns. The Missouri—the longest river in the United States—carries a similar reputation, being labeled as dangerous to navigate in the 1800s when steamboats gained popularity. 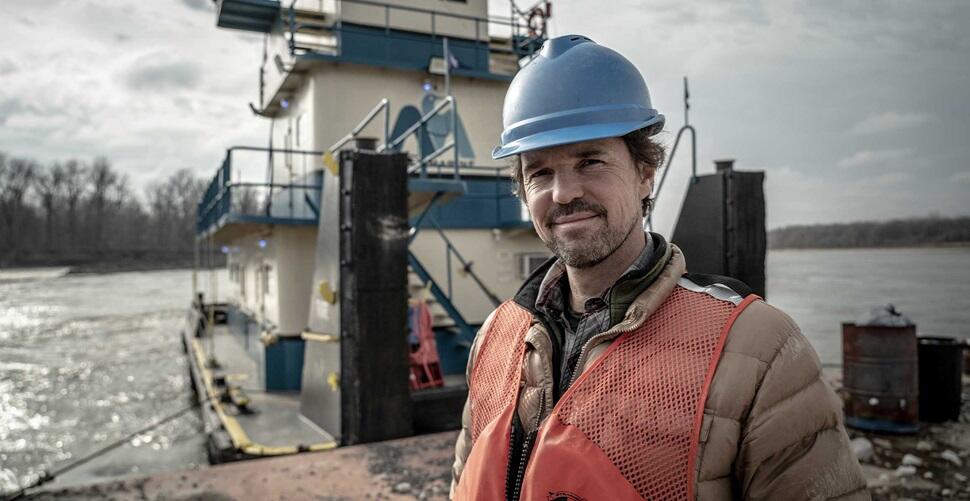 When the time came to repower its river tugs, Newt wanted to remain true to the company’s environmentalist roots with an environmentally friendly engine that offered fuel savings, low emissions, and reduced noise. But he also recognized the new engines had to satisfy their needs for reliability and ruggedness on the river.

“We work remote on the rivers,” Newt emphasizes. “If we break down, we can’t have a tow truck coming to get us off the road. Reliability of engines is key.”

Safety also is a concern. Newt explains, “We run into flood waters, where water can jump eight feet in a matter of 12 hours. It can go from sunny to tornadoes and 50 degrees in minutes. You must take every precaution to make sure that everyone goes home safe at night. These motors play a key role in that reliability.”

“The electronic controls make a vessel respond more quickly,” Blum says. “It gives operators more confidence in the boat's maneuverability. But it’s the reduction in maintenance that is key. There is really no maintenance for the electronic controls other than the control head itself. You don’t have to worry about a bad actuator, leaking valve, or airline leak it is a simple plug and play system.”

The engine’s variable injector pressure and efficient cooling system lowers noise levels, allowing the repowered vessel to run smoother and quieter. “And, the fuel efficiency is unreal,” Newt says. “We are averaging 13 gallons an hour on the new Volvo Penta engines. The old engines were right around 38 to 39 gallons per hour.”

Though the reliability of Volvo Penta engines reduces their maintenance needs, Newt Marine went with Volvo Penta’s extended five-year warranty for added protection. The Extended Coverage program covers repairs and replacements of defective parts for up to five years, including all Volvo Penta branded products. The extended warranty excludes consumables such as filters, hoses, and belts.

Contact a Volvo Penta Power Center to discuss your project.